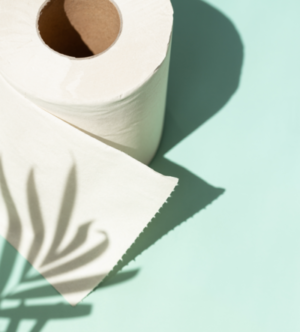 What did people use before toilet paper?

It is difficult to imagine nowadays, but there was once a time when toilet paper wasn’t around; it hadn’t been invented. In other countries around the world where other forms of personal hygiene are more common (such as the bidet for example) then this might not seem such a terrible thought, but here in the UK where all we have known is toilet paper, then the thought of what went before is not a thought you want to linger on for too long!

It is documented that the large-scale production of toilet paper started in the U.S. in the 1850’s, but people around the world have employed a variety of other methods for cleaning themselves long before this time. Around the world today, millions of people, particularly in Asia and the Middle East, don’t even bother with toilet paper, choosing instead to use a clean rinse of fresh water.

In ancient Rome people often used a tersorium instead of paper to wipe. These ancient cleaning aids consisted of a stick with a vinegar or salt water-soaked sponge attached to the end (they looked not dissimilar to a modern-day toilet brush, and they are mentioned frequently throughout Roman literature).

Archaeologists have also uncovered samples of pessoi, said to be an ancient Greek and Roman toilet paper equivalent (or substitute depending on your viewpoint!) which consisted of a small oval pebble or sometimes pieces of broken ceramic. Pessoi have been found in the ruins of ancient Roman and Greek latrines and the parasitic remains on them can only come from a human and therefore must have been used in a latrine context.

China was ahead of the times when it came to toilet paper and the earliest reference to toilet paper have been discovered in materials written by Yen Chih-Thui, a sixth-century A.D. scholar who had access to discarded manuscripts which were used as a form of toilet paper. Researchers also suggest that hemp paper like that found in the tomb of second-century A.D. emperor too rough for writing, was used in the bathroom instead as an early toilet paper.

By the year 1393, rice-based toilet paper was mass-produced for the Chinese imperial family. As a comparison, it took over 450 years (1857) for the Western world to get its first mass-produced toilet paper. You might be surprised to know that bamboo paper has been made since the 3rd century and it is now over 1700 years since it was first used and now makes bamboo toilet rolls and bamboo kitchen rolls around the world.

So, no matter how much we might complain about toilet paper shortages during stockpiling in pandemics, or the inconvenience of buying and carrying it home, it is far better than the pre-paper solutions of sticks or pebbles!